In this fourth article, we look at how much energy an aircraft requires, why kerosene has all the right properties, except it's fossil, and the challenge of alternative sources of energy.

How much power does an aircraft require?

A commercial aircraft is a big machine. It weighs a lot, carries a heavy payload (hundreds of passengers with bags and freight), must fight gravity, and moves very fast — all good reasons for requiring a substantial amount of energy.

The following table is from a presentation by Jean Hermetz, in charge of research on new aircraft configuration at ONERA, the French aerospace lab. The numbers are just astonishing.

It gives the maximum installed power and the on-board energy when the aircraft is loaded at full capacity of its tanks for various types of aircraft.

In terms of power, large commercial aircraft face a double challenge: they require a high level of power, and they need a lot of available energy with a mastered weight. When you need to fight gravity and move fast, weight is clearly the enemy.

Kerosene has all the right properties, except it's fossil

Kerosene has all the right properties to be aviation fuel.

First of all, it remains liquid and safe at a vast range of temperatures.

Jet fuel freezes only at -47°C (-53°F), which is compatible with the very low-temperature aircraft meet when they fly high in the atmosphere. And jet fuel's autoignition temperature is 220°C (428°F), making it is safe at very high temperatures.

Secondly, it is highly energetic: its combustion produces 43.15 Mj/kg. It means 100 tons of kerosene (the tank capacity of a large aircraft) contain more than 1 GWh of energy. It has a high density of energy per mass and per volume (jet fuel's density is ~0.8 kg/liter).

But, energy per volume is almost equally important. When you look at pictures from commercial jet aircraft since the 1950's, you might have noticed that their shape has very little changed: they are made of a cylinder-shaped fuselage where the passengers sit and of wings that provide the lift.

This is nothing but a coincidence: this shape and the proportion between the fuselage and the wings has reached an aerodynamic optimum for sub-sonic flights. And it so happens that with this optimal aerodynamic configuration, the volume available in the wings is just what it takes to carry the right amount of kerosene for the aircraft's payload and range. 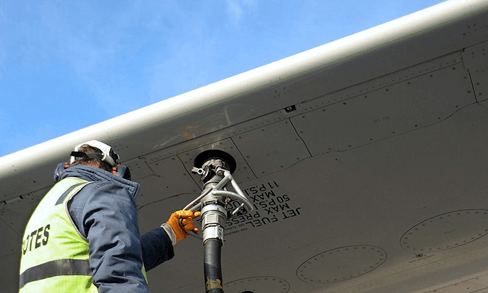 Read this article to know why fuel is stored in the wings.

This means that kerosene is an excellent energy storage system. Should you substitute kerosene for something else that requires more room because its energy per volume is lower, and you need to reconsider the aircraft's whole shape and aerodynamics, probably for the worse.

And finally, kerosene is cheap. Nature has produced crude oil, and you just need to pay for its extraction, transformation, and handling.

So, kerosene has all the right properties to be aviation's fuel? Yes, except for one big problem: it produces CO2. Each kg of burnt fuel produces 3.15 kg of CO2.

As we saw in Episode 1: How much CO2 does aviation emit?, CO2 is a powerful greenhouse gas and the main reason why our planet Earth is warming up at unprecedented speed. And unfortunately, when CO2 is released in the atmosphere, it is there to stay for 300 to 1,000 years.

Because they release quickly large amounts of CO2 that mother nature took millions of years to capture and transform in its soils, fossil sources of energy are the enemy of our planet and should be phased out as soon as possible.

The challenge of mass density and volume density

Why can't we use other decarbonized energy sources, such as green electricity or green hydrogen (produced from renewable sources of energy or nuclear plants)?

We probably will, but we face multiple technical challenges that we'll detail in the next episodes.

One graph from a research paper by Martin Hepperle at the German Aerospace Center shows the core of the problem: density of energy per mass and volume.

One important thing to notice on this graph is that it uses a logarithmic scale: each graduation to the right or the top means an x10 increase.

Kerosene is in the top right corner: it excels in energy per mass and energy per volume.

If we were to replace jet fuel with batteries on an A320, then the batteries' weight would exceed ten times the maximum take-off weight of the aircraft.

Hydrogen, if it's liquid or under high pressure, stores a lot of energy per kg, making it a good candidate for aviation where weight is the enemy. But it falls short in terms of energy per volume, which will inevitably lead to different aerodynamic designs. It also poses other challenges that we'll detail in Episode 6: The hydrogen aircraft.

The next episode of this series is entitled "The electrical aircraft."