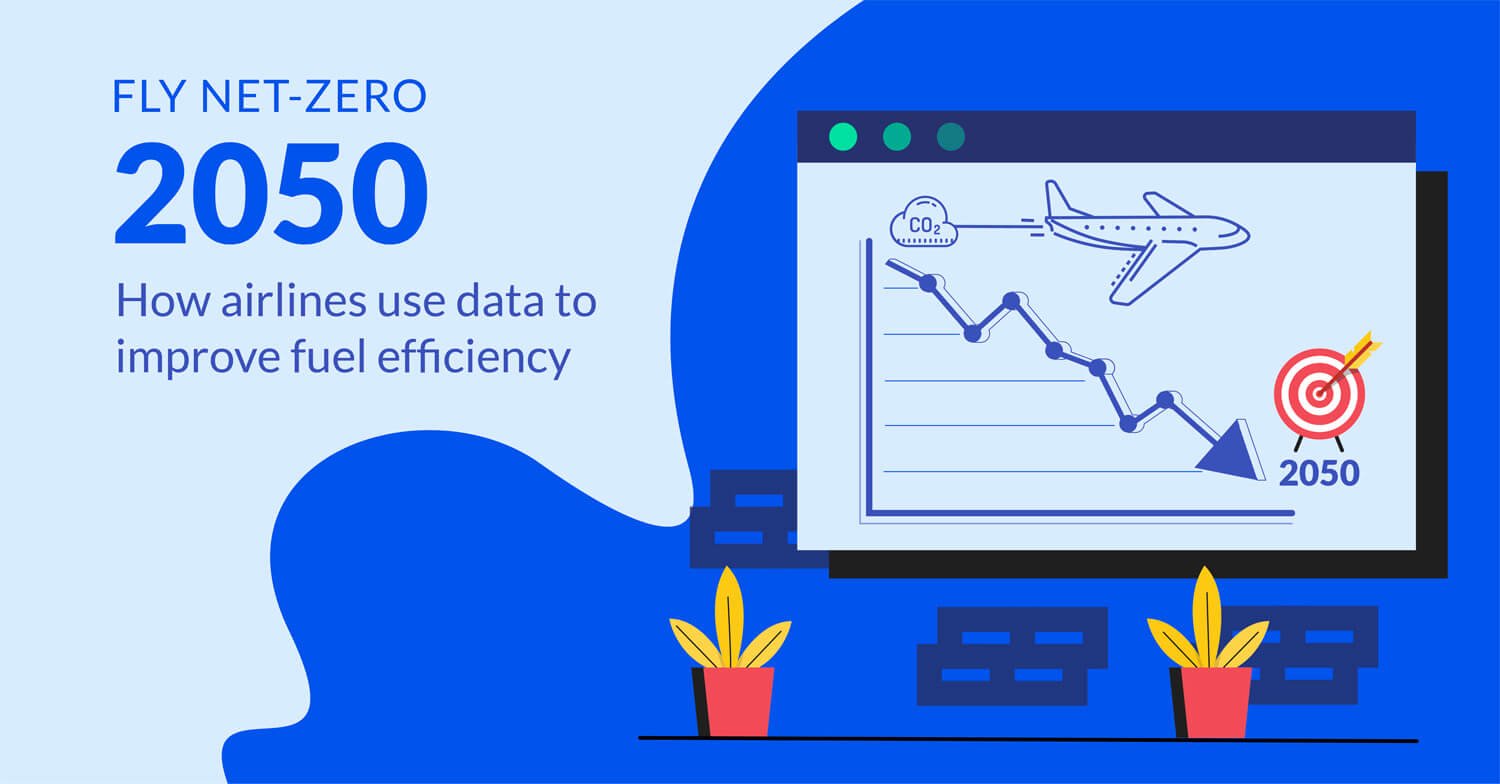 Fly Net-Zero 2050: how airlines use data to improve fuel efficiency?

Cutting costs while reducing greenhouse gas emissions and saving the planet are no longer mutually exclusive propositions. One of the keys to a both sustainable and profitable future for the airline industry lies in data - and software that can harness its potential to enhance operational efficiency and reduce fuel burn.

On the road to 2050 net-zero carbon emissions

Airlines all over the globe have committed themselves to the ambitious target of reaching net-zero CO2 emissions by 2050. Some, such as Alaska Airlines and JetBlue, have even obligated themselves to achieve carbon neutrality as soon as 2040. Over the last few months, these aspirational goals have been transformed into very real and workable, intermittent milestones for emissions reduction. These include the science-based target set by the SBTi and American Airlines to reduce carbon intensity by 45% compared to a 2019 baseline by 2035. Meanwhile, low-cost giant Southwest Airlines is aiming for at least 20% by 2030.

When it comes to aviation sustainability, it is not going to be a question of “either or'' but rather one of “and.” The industry is going to need all the technological pathways currently in the pipeline to reach its environmental targets. Generally, there are four main areas airlines can leverage to reach these intermittent goals, for which they will also be held increasingly accountable by policymakers and the flying public.

For the intermittent targets, given that technological leaps such as novel propulsion systems (hydrogen, hydrogen-electric, etc.) will not arrive in earnest before at least 2035, these are: fleet renewal and modernization, sustainable aviation fuel (SAF), carbon offsetting, and enhanced operational efficiency.

The latter will depend to some extent on air traffic control enhancement. For instance, as part of a demonstration of the potential implications of a Single European Sky for the European Union, a recent June flight from budget carrier Vueling between Barcelona, Spain, and Lyon, France, reduced CO2 emissions by close to 10% by operating along an optimized flight path. However, there are fuel-saving measures and operational solutions that are in the hands of the airlines, and could provide a substantial piece of the puzzle as they get to work on those interim goals. 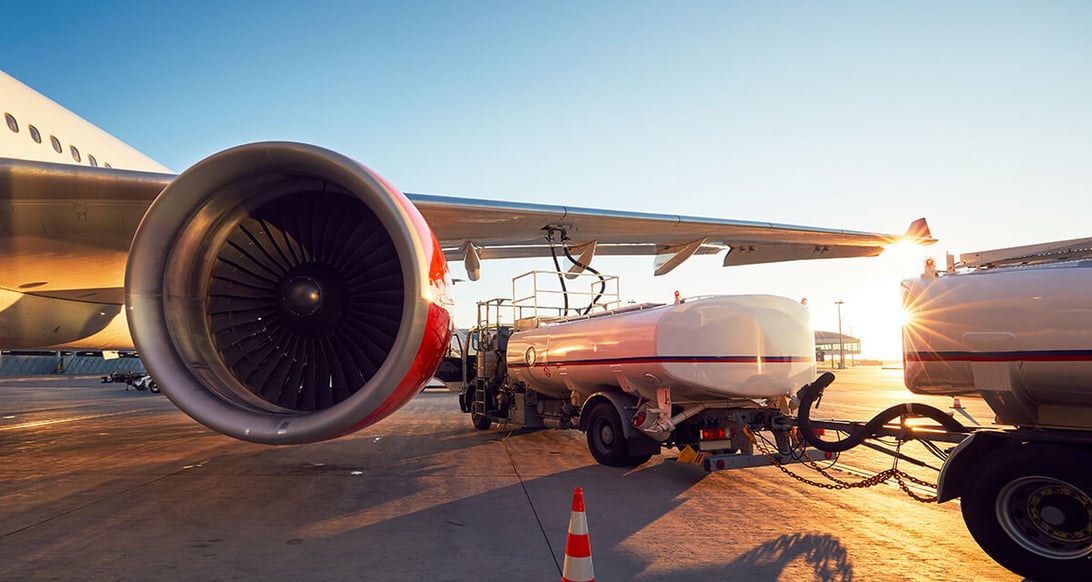 If there is to be an aviation industry as we know it today in the future, airlines have no choice but to invest in fuel efficiency and emission-reducing technology. Initially, most of CO2 savings will come from more fuel-efficient aircraft. The newer generation of single-aisle aircraft, such as the Boeing 737 MAX and the AirbusA320neo, burn about 16% to 20% less fuel than the aircraft they are replacing. With SAF set to remain much more expensive than fossil-based jet fuel for the foreseeable future, fuel savings will also become of utmost importance from a cost perspective for a long time after the price for oil restabilizes at lower levels.

Making environmentally conscious choices no longer equates to being at a competitive disadvantage. In fact, quite the opposite. As fuel prices have skyrocketed, airline ticket prices have also seen a steep upward trajectory. At the moment, pent-up demand is still driving recovery, but bookings have already begun to drop with US domestic airline ticket prices soaring almost 50% since January this year.

As the effects of climate change become more and more felt across the globe, airlines that invest in CO2 emission reduction will also be increasingly rewarded by travelers. Corporate clients will play an incredibly significant role, under pressure from shareholders to produce tangible ESG results as they strive to lower their own Scope 3 emissions. Meanwhile, the environmental awareness of individual consumers will also grow as time progresses.

The power of data to improve fuel efficiency

The aviation industry has always generated enormous amounts of data. Mostly, it has been going to waste, or applied very topically for specific use cases. However, with today’s computing power and machine learning, software is able to transform that data into climate-friendly and cash-saving fuel-efficiency measures. These are to a great extent applicable across the industry, but also individually significant to each unique airline. Furthermore, current AI-driven technology facilitates seamless communication between airline management and operations, fostering a greater sense of ownership of the company’s fuel culture across all stakeholders.

Perhaps the most deciding factor in the race for net-zero will be who can utilize their data to its fullest potential. The OpenAirlines SkyBreathe® software can reduce fuel consumption and costs by as much as 5%, without any need for airframe or engine upgrades or new infrastructure. It helps airlines identify fuel saving opportunities that are directly implementable. Furthermore, it helps monitor, manage, and improve the fleet’s overall operational efficiency.

Fuel savings mean economic savings. If there are fuel savings to be had by up to 5%, that means less cost increase to ticket prices, in all likelihood equaling more bookings and more cash flow. For an already highly fuel-efficient Airbus A350 XWB traveling between New York and London, given current fuel prices, it equals a direct saving for one single flight of about to $2,300.

The third largest airline in India by passengers carried and largest commercial passenger carrier by cargo, SpiceJet, began using the SkyBreathe® software suite in 2019. In the first six months of implementing SkyBreathe®, SpiceJet, given the fuel prices of 2019, had saved $3.3 million. This equated to 6,200 tonnes of fuel saved. With current kerosene-based jet fuel prices, as reported by IATA’s jet fuel price monitor on June 10, 2022, savings would have topped $7 million.

Furthermore, the airline saved 20,000 tonnes of CO2 in those first six months. Meanwhile, when considering these numbers, it is important to take into account that the baseline was not one of a zero-data business-as-usual approach. SpiceJet had already achieved savings of over $2 million through the use of other efficiency programs.

Despite the snag in the trajectory over the past couple of years, SpiceJet is focused on growth, with an order for 144 Boeing 737 MAX 8 aircraft, 13 of which have already been delivered.

Of course, for all the good intentions of airline management and sustainability policies, achieving fuel reduction requires the participation of front-line airline crew, and one of an airline’s most valuable asset - its pilots. Individual briefing/debriefing apps such as MyFuelCoach™ are designed to empower flight decks to have agency over fuel-conscious choices, make more informed decisions, and adjust their operations. During the flight, when pilots are usually busy performing many tasks, an EFB application like SkyBreathe OnBoard® can provide real-time support by pushing relevant and timely notifications to pilots about fuel-saving opportunities.

As the British Air Line Pilots’ Association (BALPA) recently stated, pilots have always been the “conscience” of the aviation industry over safety, helping to create the safest mode of transport ever known. They now also have the opportunity to contribute to ensuring the survival of the industry and generate effective solutions to preserve the undeniable benefits of air travel for humanity and business.

After two years of prolonged crisis and with US airlines still making a collective loss of over $5 billion in the first quarter of 2022, fuel efficiency percentage points matter more than ever before. For the passenger, for the airline, and for the planet as a whole.

Do you want to improve your fuel efficiency?

Download a detailed case study about how SpiceJet has managed to save 6,200 tonnes of fuel and $3.3 million in 6 months!

[Infographic] How does aircraft performance monitoring make airlines save fuel?

Aircraft performance monitoring allows to follow and analyze the actual performance of the fleet to...
Read More