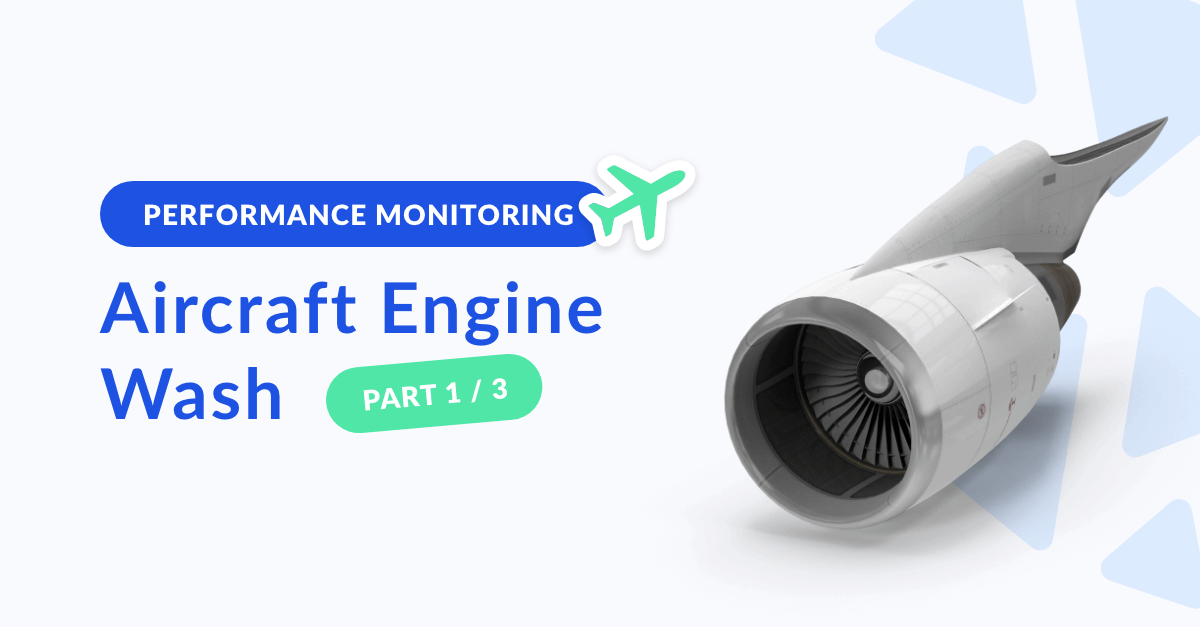 Have you ever wondered how the engines of an aircraft are washed and why it is important to do so? If yes, then this series of articles is made for you. We will address the basics of engine wash, why it is important to properly monitor it with adapted tools, and how it impacts the Exhaust Gas Temperature (EGT).

Learn more about engine wash in this three-part series:

So, let’s kickstart our journey with a quick recap on the basics of aircraft engine wash.

Why do we wash?

Aircraft engines are regularly washed to improve their performance. Engines are operated in salty, sandy, or dusty environments. In addition, objects such as insects or birds are ingested and leave residue on the engine parts that affect their efficiency. Moreover, the combustion process often emits fine particles in the air that are later ingested by the engines and deposited on engine parts and surfaces. Aircraft engines then need to be regularly washed to be in the optimal state for improved performance.

Companies that provide aircraft engine wash services promote a reduction of the overall fuel consumption of the engine. When this is achieved, CO2 emissions are also reduced. Engine wash is a win-win situation for the environment and for optimal aircraft performance.

What do we wash?

The process of washing the engine aims to eliminate dirt, grease, and lubricant buildups. If not cleaned regularly, the residue will become aggregation points for other external particles, speeding up the fouling process.

The engine wash operation cleans the engine compressor rotor blades and stator vanes on which particles deposit, modifying the airflow and deteriorating the engine performance.

How do we wash?

The most common way to wash the aircraft engine is to use water with limited mineral parts, such as demineralized water or water with restricted chloride content. A detergent product can also be added, and even glycol to cope with low temperatures. With the support of a compressor washing rig, the water is propelled at high pressure through spray nozzles into the engine running at dry motoring mode.

The engine’s nacelle is sometimes opened to let the water drain off. The process is composed of several washes and rinses with a final short engine run to dry the parts.

Some alternate and potentially more efficient processes have emerged these past years with water-based solutions being replaced by foam-based tailored solutions, and even by dry ice blasting, detaching the dirt from the engine parts surfaces.

When do we wash?

Engine wash can be performed on-wing during a long turnaround as the operation takes a couple of hours, and sometimes less than one hour depending on the process. It can also happen during other maintenance checks with specific operations on the engine. Because water is used for the cleaning process, the engine wash can’t be performed when the outside air temperature is too low.

How often do we wash?

Engines are usually washed approximately every hundred cycles which correspond to a couple of times a year for commercial aircraft. A clean engine results in better fuel efficiency which means it should be cleaned as often as possible to ensure the engine’s best performance. However, engine wash comes at a cost. One of the roles of the Maintenance teams is to evaluate the trade-off between the fuel savings and costs associated with an engine wash operation. This point is discussed in the second article dedicated to aircraft engine wash: How to optimize the duration between two engine washes? (to be published).

Want to go further and learn more about the savings you could make by monitoring your fleet's performance?

Read the article >> Three benefits of Aircraft Performance Monitoring to improve your operations.

How to use the cost of weight to be more fuel efficient?

Fuel efficiency depends on many criteria. One of the most important is weight: the more weight you...
Read More

[Infographic] How does aircraft performance monitoring make airlines save fuel?

Aircraft performance monitoring allows to follow and analyze the actual performance of the fleet to...
Read More